I had the opportunity to speak at SIEGECon 2010. SIEGE stands for Southern Interactive Entertainment & Game Expo.  Pretty cool acronym.

So I drove down to Atlanta on Thursday, September 30th. It is about 300 miles/5 hours from the Greensboro area. I arrived Thursday night late. I stayed at a hotel down the road since it was about half the price of the hotel where the conference was being held. It was only a 3 minute drive, so no big deal there.

I spent an hour trying to get my Xbox 360 on the hotel wireless since I would need it for the XNA session I would be giving on Saturday.  After trying a few things with no success I went to bed around 1:30.

I was up early to attend and the WP7 training with Glen Gordon and help answer any questions on XNA.  The WP7 event was 4 hours of tutorials that was not really part of the actual conference.  There were over 200 high school students brought into sessions that Friday morning.  There were probably 30 that rotated in and out of the WP7 sessions.  Glen did a great job with the presentation and I heard several folks talking very excitedly about the phone.  There was even one person who sent a message to his friend in an Adobe session to come over to hear Glen’s presentation. That was cool.

After the WP7 tutorials, we had a nice lunch provided.  I was able to talk with Andrew Greenberg, the conference’s organizer about the conference.  We had a good conversation about community and the conference.  He introduced me to Noah Falstein, one of the key note speakers for the event.

After lunch, I went to a deserted room to try and get my Xbox 360 on the hotel’s WiFi.  I was making the assumption that if I could get it to work in one hotel, it would work in the other. The problem is that hotels shove a proxy in between the machine and the internet.  This redirects traffic to the hotel’s agreement page (where you may have to actually pay for access).  This is all done through a web browser.  When connecting through a laptop this is no problem.  Enter the credentials in the web form and you are on your way.  The Xbox 360 has no browser and that is the problem.  So I messed with that for another hour and half before the room was being occupied for an upcoming session.  I didn’t make any headway and packed everything up and put it in the car and then headed to the first actual session of the conference.

The first official session of the conference I attended was “Speed Dating”.  No, I wasn’t looking for a date.  I’m happily married.  This was a session to network. It was a lot of fun and I was able to meet a lot of folks in a short amount of time.  I met teams that were just starting up and had a game concept together but nothing else to teams that had everything and were looking for networking support. I met graphic designers, other developers, audio gurus and even cartoonists. It really was a great way to kick off the conference. 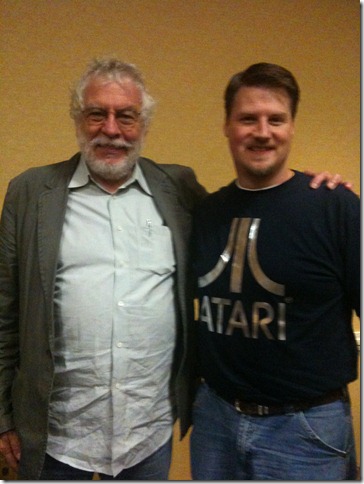 After the first session was the keynote.  The keynote speaker was Nolan Bushnell, who co-founded Atari, founded Chuck E. Cheese and founded uWink.  I’m a huge Atari fan. I have wanted a retro Atari shirt for the longest time, but none of those “70’s/80’s” stores ever carried them.  Once I found out that Nolan was going to be the keynoter, I jumped online and ordered 3 Atari shirts.  One is actually a Pong shirt with an Atari logo and the other two have the Atari logo with the word Atari underneath it.  I wore an Atari shirt each day I was there.  I was proud of my nerdyness.  I actually wore my Pong shirt on this day since Nolan is credited for creating Pong.  The actual development was done by his co-worker, Al Alcorn.

Nolan’s speech was excellent.  He had images from the early days when Atari created Computer Space.  He talked about some of the specs for the Atari VCS 2600.  For example, it only had 128 bytes of memory.  That’s bytes – not kilobytes!

For those that remember the original starter kit that came with XNA called SpaceWar.  That was created after the first ever computer game.  SpaceWar! ran on multimillion dollar mainframes and Nolan played it while he was in college. That is what inspired him to create Atari to sell coin operated games.

Nolan spent some time also discussing some Economic Models like Subscriptions, Buy the box, Download, Free to play / pay to win, and Ad Supported when it comes to games and software in general.  He talked some on Augmented Reality and the future of games.  It was a really interesting talk.

There were some interesting quotes I jotted down while he spoke:

“You should fire 5 to 10% of your people every year.” – I have read of GE doing this. And then seeing the Netflix PowerPoint to their managers on culture and business last year, I really agree with this philosophy.

“Home schoolers get into colleges easier than public school and that is wrong.” – We homeschool our children, but I didn’t see this as a slam to homeschooling based on how he was talking, it was definitely a slam on the public school system.  He definitely thinks that the “problem with schools is 1/3 of the teachers are dumb as a post.”  I believe that is what led into his comment about firing 5 to 10% of employees every year.  I’m not opposed to the public school system.  I think a lot of the success behind home schools comes from the ratio involved.  1:1 or 1:4 is much better than a typical class room of 1:30.  1 teacher for 30 or more students just becomes a lot of crowd control.  People don’t learn the same way.  Folks get left behind because they didn’t understand something that was presented.  When a teacher only needs to worry about a few students they can take time to make sure the student understands before moving on.

Another quote of his was “Privacy – Get over it.” – He mentioned this when talking about Mobile games and GPS / Location aware apps.

“You are smart. Procreate.” was another quote from his talk.  He then went from this into the best quote from the session:

“The best life is a life of balance.”

After his keynote a few of us were able to chat with him afterwards around a table. I was amazed by how he made himself available.  During his talk, I noticed when he talked about Nintendo’s Wii and PlayStations Move that he didn’t mention Kinect for the Xbox 360.   I also noticed he didn’t mention Windows Phone 7 after talking about Android and the iPhone.  Around the table, I asked him if he had any thoughts on WP7.  To my surprise he suggested to not spend any time on that device.  I asked why and he thought that carriers weren’t going to carry the phone.  It seems to me they are, although Verizon and Sprint will be early next year.  Unfortunately, I must disagree with him on this point, but it was definitely awesome to get to talk to him and hear insight on many different subjects.

That evening there was a party by the pool area, but it was entirely too loud so I went back to my hotel to test out the 360 some more for my presentation the next day. Everything worked on the first try, but my TV Card had a device driver failure but I could still use it.

The next morning, I showed up early to get 360 going in the room I was going to speaking in. I didn’t get a chance to get it setup before the first session started, so I left the 360 in place (behind the podium) and packed up the rest and headed to the Augmented Reality session.  This was a great session and seeing the stuff Georgia Tech and SCAD did with the android and a cardboard city on the table was amazing.

Unfortunately, I had to leave early so I had enough time to setup for my session.

With the 30 minutes between sessions I had just enough time to get my environment setup for my talk on Xbox 360 Programming with XNA.  The 360 was online and I was able to launch XNA Game Studio Connect.  (This was done by sharing my wireless connection on my laptop.) The video card was doing its job (although the error message was on the screen, but I just moved it down toward the taskbar.)  PowerPoint was queued, VS2008 and VS2010 were loaded with my projects.  Projector was display my laptop correctly (for the most part).  So I was really happy.  This had a lot of moving parts and many things could have gone wrong. Fortunately, nothing did.  I had a lot of material to cover and an hour wasn’t really long enough and so I didn’t really get to show too many demos.  However, everyone that talked to me afterwards couldn’t believe just how easy it was to get up and going on the 360.  Mission accomplished.  Now I was going to be able to enjoy the rest of the conference without worrying about my presentation not going to plan.

I put all of my gear back in my car and then grabbed some lunch. The boxed lunches at this conference were nice.  After lunch, I hit up my first Serious Games session.  I was hoping to be able to meet some folks in this area as I’d love to be able to do more game development in the business world.

The next session I went to was also on the Serious Games track and discussed 3D in Serious Games. It was a good session as well. There was some mention of SecondLife and OpenSim.

The Keynote was presented by Noah Falstein. He focused on game design in his talk.  He also talked about The 400 Project which is trying to create a certain number of rules (400) around game design.  The list is currently up to 112.  Take a look at the list if you are designing any games it is always good to keep these things in mind when designing a game or a level.

The first session of the final day was a panel session with Nolan Bushnell and Noah Falstein on “How did we get here”.  This was a fantastic session and I learned quite a bit just hearing these two guys chat.

I then attended the “Not losing your balance: making gameplay fair” from a couple of developers that worked on Sid Meier’s Civilization Revolution.

The last session I attended before leaving was Serious Games in Management and Commerce.  I had just started my GlobalCove Technologies company and one of the areas we want to become more involved in is Serious Games.  All of these talks were excellent.

The conference was a huge success.  I learned a lot and was able to meet a lot of talented people.  The best part was it only 300 miles away from my home instead of 3,000.  Typically I have to head to the west coast to attend a game developer conference like this.  I’ll be going back next year.